Buy ANYTHING in our Freeport ME store online! Click to Begin 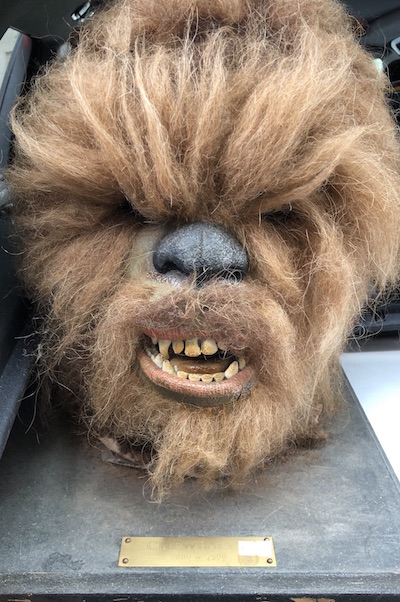 The world's ONLY Wookie Wishing Well! DotCom Comics and Collectibles is raising money for charity by offering wishes on Chewbacca's head. Yes, really

What is a Wookie Wishing Well?

Glad you asked! Because it was invented by DotCom Comics and Collectibles.

We are as nuts about Star Wars as the next guy, and when this limited edition Chewbacca's head collectible came up for sale, we just HAD to buy it.

Ol' Chewy has seen better days. We will be cleaning him up prior to installing him in the store.

Nothing can be done about his male pattern baldness.

Some enterprising former owner has attached replacement hair, but even the vainest of wookies won't be fooled by the patch up rugs.

Don't hold it against him. Drop in a coin or bank note, and make a wish.

(But in fairness, we haven't opened the store yet -- the Wookie Wishing Well debuts on our grand opening day, May 4, 2019!)

Which Charity Does the Wookie Wishing Well Support?

DotCom Comics and Collectibles will be looking for deserving local charities and will drop off the funds once a month or so.

We will publish updates, including a running total of the amount raised by the Wookie Wishing Well, on this page.

Next time you're in the store, please take a moment, make a wish, and help our wookie to make somebody else's life a little better. Thank you.

We'd Love to Get Your Feedback!

Did you enjoy your visit to our store? Please take a moment to write a review of DotCom Comics and Collectibles!